well, i saw this title and read it again, just in case my thoughts are playing with me again.(what i mean is, sometimes i read something, and just when i am finished i realize, i have no idea what i read...not because it was some different language or something...but because my mind was engaged somewhere else)
but it was the same- a suspended "coffee..."
and i asked myself what is the meaning of a suspended coffee... and i read this 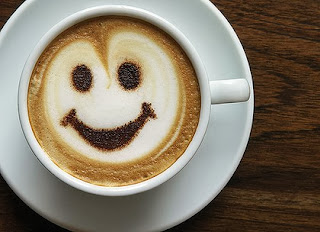 i entered a little coffee house with a friend of mine and gave our order. While we were approaching our table, two people came in and went to the counter -
‘Five coffees, please. Two of them for us and three suspended’
They paid for their order, took the two and left . I asked my friend:
‘What are those ‘suspended’ coffees ?’
‘Wait for it and you will see’
More people entered. Two girls asked for one coffee each, paid and left . The next order was for seven coffees and it was made by three lawyers – three for them and four ‘suspended’. While I still wondered what was the deal with those ‘suspended’ coffees I enjoyed the sunny weather and the beautiful view towards the square in front of the café.
Suddenly a man dressed in shabby clothes who looked like a beggar came in through the door and kindly asked, ’Do you have a suspended coffee ?’
It’s simple – people paid in advance for a coffee meant for someone who could not afford a warm beverage.
The tradition with the suspended coffees started in Naples, but it has spread all over the world and in some places you can order not only a suspended coffee, but also a sandwich or a whole meal.

i really love it... this culture... seems like  classy way to help people, not like us Indians...
giving up stuff when we do not need them anymore....
not even like people asking for money at roadsides, and we feel as if giving them money for food is more like paying for their drugs and other addictions.
and not to forget, our dear hosts may fill their own pockets
at October 07, 2013